So many times Keith has represented the moon with a female image. He generally painted the moon as feminine and the sun as masculine.

St IA was a real person who came to St Ives from Ireland to teach Christianity. She had a brother named Erth who travelled with several other missionaries to Cornwall. She wanted to come with them but as so often happened to women of that time, was told it was unseemly so she was left behind. This did not stop her. Legend tells us that she arrived on Porthmeor Beach sailing upon a leaf. (This was most likely an Irish boat made of skins which resembled a leaf to the people on the shore.)  Young IA (or Eia) was most fortunate, for the currents that brought her could have just as likely taken her as far as Nova Scotia or beyond. At a tender age (perhaps as young as 15 or 16) she set up her teaching station on what the locals call the 'Island' where St Nicholas' Chapel sits today. It very likely was surrounded by water in those days, much as St Michael's Mount is stranded with the tides. It all ended badly for IA, her brother and his fellow missionaries as King Theodoric of Hayle objected to this new religion and had them all killed. But his objective backfired! The Cornish are a strong and stubborn lot when it comes to telling them what to do or what to believe. Each village not only renamed themselves after their respective missionary (St Erth, St Just, St Ives, etc) but they also incorporated these new teachings into their lives. Keith used to joke that even today the rugby and football teams between St Ives and Hayle carry on this ancient feud! The Cornish name for St Ives Is Porthia or IA's Cove.

Prints of "The Legend of St IA"  have all been sold, as it was a limited run of 500. There are, however, canvas prints available, of which there will only ever be 100. These can be ordered in 2 sizes for £250 (16" square) or £350 (18" square) respectively. Each print is numbered and has Keith's embossed seal applied. There is one and only one large version of The Legend of St IA which is the same size as the original measuring 30" square and since this blog was released has now been sold. There will not be another printed in this largest size.

Keith represented stars with lovely Goddesses who, as archetypes, are assigned to lovingly protect their charges. Starlight has guided us for many centuries and who can look upon the Milky Way and not think of God? Here Keith is expressing the Mother aspect of God or the Divine Feminine.

An exception to this concept of moonlight and starlight being in the realms of the feminine is his painting of a Native American legend "White Buffalo Woman". This painting is definitely depicting a archetypical  Sun Goddess. She was a great teacher to her people, teaching them of the buffalo, the growing of corn and introducing the pipe of peace. This is one of two spiritual paintings that Keith painted in the summer of 1988 that began all the rest.

This very masculine painting 'Sun God' shows a different side of the archetype. Many ancient religions based their God on the rising and the setting of our sun. 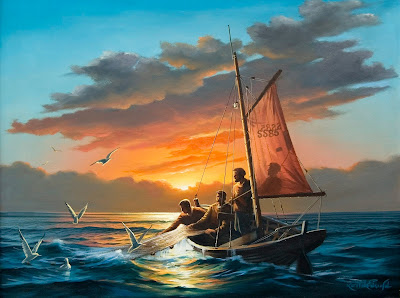